With the certainty of tides, 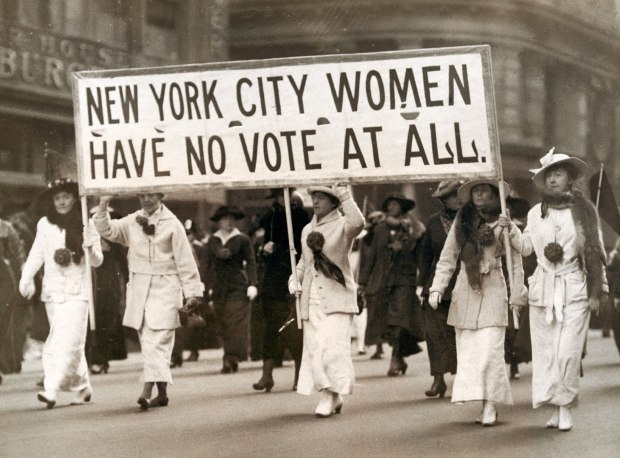 3 million, the not so hidden figure. 3 million Americans marching today, 3 million more Americans who voted for our girl. Hopefully, 3 million women and men who will let this energize them and stand up for change and active empathy by running for office, donating to Planned Parenthood, registering voters or just putting their shoulder however they can.

But hey! 3 million just nationwide. Cut to Sydney, London, Cape Town, Paris, Berlin, Nairobi. Isn’t it natural? Rational people dislike kitten-grabbers, white supremacists, bigots and ignorants who were handed the election through all kinds of illegal interferences. Not even Sarah Palin saw this coming. This was the Women’s March, but it’s also the majority’s march. A chance for dads, veterans, climate and social activists, teachers, LGBTQ folks, immigrants and more to say: “We’re disgusted and will not be silenced.” But we will also learn from this. As TIME Magazine reported this morning, “some are vowing to round up every vote they can for local elections in the next two years. Adrianne James, a 45-year old I.T. technician in D.C., said she’s newly energized to work within her community to make sure everyone is as civically engaged as they possibly can be. […] “We need to vote, we need to get people to the polls, we need to get ready for 2018.” And no, champ, this is not fake news. These are testaments from the people whose interests you should now work to safeguard.

The crowds are so large at the D.C.’s march that they could barely march.

Now, this is uplifting. But what’s not in my own subjective opinion is that women should have taken to the capital for another reason – to celebrate the fucking crashing of the glass ceiling. Once and for all. She deserved it and so did those of us who count ourselves as progressors. It was our chance (men’s and women’s) to defy the alarming stereotypes long rooted in the (unfair, ancient and) downright ridiculous belief that genders aren’t equally able. That would translate into fewer what are you wearing’s and less concerning about why congresswoman what’s-her-name doesn’t seem to be smiling enough this morning. Support her or not, the choice really was a no-brainer. The last thing I intend here is to be a demagogue, let me say that first. We aren’t naive and acknowledge that no candidate is a knockout. But man was she close: law professor, First Lady of Arkansas and of the US, NY Senator, SecState and currently pantsuit aficionado. Every last existing publication endorsed her, and so did both Oprah and Beyonce. Any man with such a record might well be revered by both sides of the aisle and would have possibly won by a landslide. Sure, there were the e-mails and there was Benghazi. But what is not there are his tax returns or endless, overdue apologies for attacking every last thing not going his way. So weigh in yourself, but had she won, there wouldn’t have been record-breaking protests worldwide.

Grace is not epitomized by smiling at campaign events or gazing adoringly at your spouse, but by decades of opting for class and integrity when the rain starts to pour. America wasn’t there for you, and yet you showed up once again, wearing white and keeping your composure in the, likely, most difficult day of your political career. I for one hope you’re not done making history yet because you’ve inspired me beyond belief. 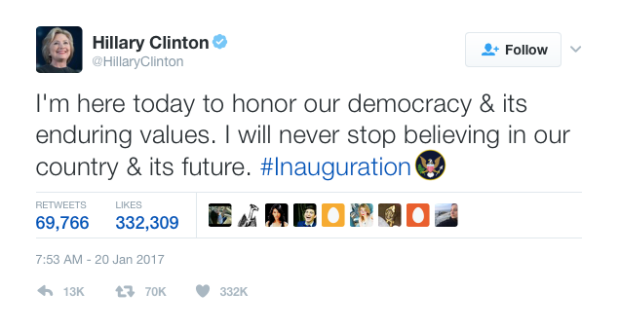 Love does trump hate as illustrated by this wonderful outpouring of fearless union. And so we must keep choosing grit, grace and action to make sure this doesn’t happen again. To make sure we elect a kind, fully capacitated leader like the former one – oh Jeez, will it ever stop hurting. Someone who will put country before party, kids before guns, minimum wage before personal businesses and compassion before cruelty. We want a first family that exemplifies what it’s like to be decent, hard-working, inspiring and why not, awesome dancers. One that makes the White House a place for everybody, that knows crying makes you human, that goes all out with children on Halloween and that chooses to honor the outstanding VP a Presidential Medal of Freedom with distinction almost the very last day of office. However high the bar is, we want to be able to support you because we expect a lot from the greatest democracy on Earth. And make no mistake about it, we will always go high.

Thank you Hillary, Michelle, Gloria Steinem, Madeleine Albright, Meryl Streep, Maya Angelou. For speaking the truth certainly better than most of us can do, but still motivate us to try.

The Obamas and the Clintons in Philadelphia on Nov. 7, 2016

Let us fight to make sure that becomes a gospel truth.

All political views compiled in this essay come from a Democrat viewpoint and are unequivocally subjective.