“You know what I like about people? They stack so well.” That line alone might sump up the manipulation and hunger for power House of Cards is really all about. Featuring an editing format that oozes a signature appealing mystery, the enthralling marriage of the sly writing and the majestic cast has rightfully made Beau Willimon’s a long-running hit. 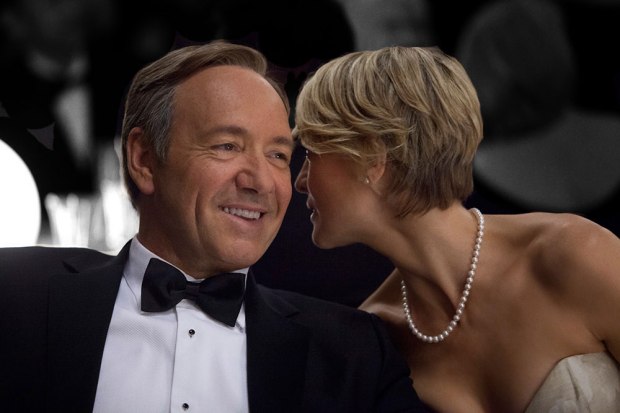 Adapted from the BBC miniseries of the same name and based upon the novel by Michael Dobbs (Margaret Thatcher‘s Chief of Staff), it’s no wonder how accurately well-crafted the show is when we look at the creator’s career itself – having worked in presidential and senatorial campaigns including Chuck Schumer’s (yep, her uncle) and Hillary Clinton’s, the Columbia and Juilliard-graduated playwright sorted through, summed up thousands of EU documents and held positions in Vietnam, South Africa or Estonia back in his days as a student. That may explain why the writing behind the debates, primaries process or inaugurations feels that lifelike. So lifelike, in fact, that it achieved the unlikely feat of winning the Emmy for Best Drama Series in its first year.

Kevin Spacey plays ruthless pragmatist Francis J. Underwood, who goes from congressman to VP and then President of the United States. Thanks to unapologetic manipulation and the help of the sly and ever-classy wife Claire (Robin Wright), who as of Season 4 was the other half of the re-election ballot, the ambitious marriage keeps climbing Washington’s ladder of political power, often at their own expense. The rest of the cast features this year’s Best Supporting Actor winner Mahershala Ali and Emmy nominees Elizabeth Marvel, Michael Kelly and Paul Sparks as the Underwood’s repective opponents and confidants.

The Underwoods planning their next move in the Oval

As is the case of any long-running hit like The West Wing or Veep, not only does the writing need to be spot-on, but also consistently engaging and always up-to-date (especially after “stunning” elections like 2016’s.) To make sure of that, Willimon, Dobbs, Kenneth Lin, Sarah Treem and the rest of the team strive to find the perfect balance between fiction and reality, strength and vulnerability and impulse and restraint. In conjunction with a masterful direction (often by Ms. Right as of last season), the results are sharp, nuanced, sly and appealing enough to keep a fanbase that tuned in in Season 1 and only continues to grow. Like that, House of Cards became the first and best definition of binge-watching. Netflix struck gold by offering the possibility of returning over and over to this addictive, outstanding show.

Supposedly submitted by mistake, Claire’s VP bid at the end of S4 leaves many open possibilities

Spacey – this year’s Tony host! – has two Oscars, a Globe and a Tony under his belt while the uber-talented Robin Wrigth became the first actress to win a Golden Globe for a streaming TV show. So this September, the Television Academy better come to its senses and give the Underwoods what’s theirs, because we don’t want any pundits’ heads rolling down the underground. Limos, who are we kidding.

All jokes aside, I undoubtedly and highly recommend watching what has become my favorite drama show and part of pop culture, with the show’s account tweeting at Sean Spicer or fans wearing Underwood ’16 hoodies as an alternative to the insane campaigns we lived last year. Under a perfect direction, marvelous script, enticing editing format and spot-on costume design, the cast and plot only keep getting better and better. And after such cliffhangers (hi, Madam President) as the ones S4 ended on as well as the real 2016 election, we can expect a nail-bitter and very charged fifth season.